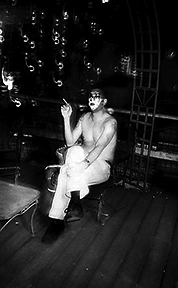 Through his photography, Victor Cobo paints a dark, sometimes sinister world of ambiguity. At turns autobiographic and then entirely fabricated, he weaves blustery landscapes with high-contrast figurative imagery including animals, self portraits, and female subjects of adoration, awe, and dread. His lurid and playful melodramas address the primal mysteries of sex, birth, death, damnation, and salvation.

Born in 1971 to a Spanish mother and an American father, Cobo is a self-taught photographer who draws inspiration from Surrealism, Film Noir, and German Expressionism. Repeated visits to The Museo del Prado in Spain with his taxi-driving grandfather and seeing midnight thrillers in Florida with his father as a child changed his life.

Cobo writes: “When I was four years old my parents went through a torturous divorce. My father had been using all manner of drugs including heroin and was an acute alcoholic as well. The relationship had been abusive, often to the point of serious violence, and finally my mother had no choice but to flee with me. . . As a child I was sent to visit him during summer breaks from school. Each day he would insist that we go out and take photographs of each other. Years later I realized the pictures he was making were illustrations of an imaginary relationship with me that he had created in his mind.” Today, Cobo explains, “The private universe that reveals itself in my work is my own mechanism of escape.”

In 2016, L’Artiere Edizioni Books published the monograph Exit Pleasure with an introduction by celebrated photographer Larry Fink, in which he touches upon the importance of ritual in Cobo’s imagery: “This was work which was drawn to its subject by bloodletting maggots, cleansing leeches, not to mention a certain odd classicism. It was informed by art, but art was not the point, ritual was. . . But, there is no escape from ritual. There is no release from pleasure. There can be no moral pain in an underground throbbing. But therein lies absence, dark frivolity, heavy breathing, a sodden wink. Exit pleasure—enter pain.”